Where are all the heroines? 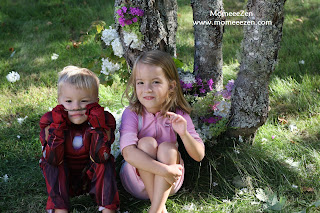 It was inevitable. And it happened: my kiddos love superheros.

They are allowed to choose shows to watch on Netflix on their iPad (I have all inappropriate shows blocked, don't worry), and one day they picked Spider Man. Well, that was a hit and they watched that for a while. Then, came The Avengers cartoon, then Spider Man and His Amazing Friends.

We have our reasons for being OK with them watching superhero cartoons, which I won't get into because it's irrelevant. But what I do want to get into is that I am upset that all the superhero toys and stuff you can buy is geared towards little boys.

The other morning Mermaid Girl went on a vent about how all the toys for girls were dolls, and fairies and pretty pink things...and not one single superhero girl was to be found. She explained that she wanted a superhero girl so she could play with her brother.

I thought that surely there had to be at least one heroine somewhere, so we went to the toy store the other day to look. And lo and behold, there was nothing. There was The Hulk, Captain America, Iron Man, Spider Man and Batman galore....but not a single figurine or toy depicting a woman superhero. Not a one.

The store was very clearly divided into a Boy section and a Girl section.

{I wish that our little girls and boys were not limited right from the get-go about what they could play with. Right from the get-go the perception of choice is illusory. Unless of course the parents and children are able to think past the gender divide}.

We wandered around each section looking.

When we got to the Boy section there was a whole row dedicated to "superheros".

Mermaid Girl picked out a Spider Man figurine, but in the end she decided not to get it. She decided to wait and see if we could find a heroine toy later.

Then when we were about to leave, I noticed that buried deep behind the Batman stuff was a very busty and scantily clad Catwoman figurine. I took it off the shelf and asked Mermaid Girl if she wanted that. She examined it carefully, it took her a few moments to say "No Thanks." I guess she didn't relate to her.

She wants a Firestar so very much. I wonder how easy it would be to get my hands on one of those...?

For now we concluded that she could use her Barbie dolls as heroines. And that I am going to attempt to sew a Barbie-sized Firestar outfit.

As we were leaving Mermaid Girl asked, "It's OK for girls to play with all these boy toys, right?"

I responded, "Of course. Girls can play with whatever they want. And if boys want to play with dolls and tea sets, they can do that too."

She continued, "Then how come stuff is in different places? Why don't they just have it all together so kids can just pick what they want?"

"Great questions. I love that you ask so many questions. Because that's how things change, my love."
Posted by MomeeeZen at 11:04 AM

Leave me a little note, it'll make me smile :-)